We attended the Wexford Business Awards 2017 which were run by the Wexford Chamber of Commerce last Friday night.  Nolan Transport was extremely successful on the night. 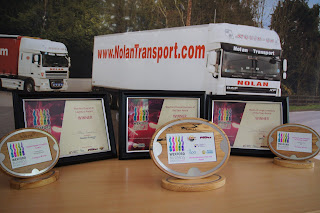 Following the application and interview process, we were shortlisted for two awards, the Wexford Large Company of the Year and the Wexford Export & Logistics Award.  The competition in both categories was very tough, with well-known companies from a diverse business range such as Pettit Group, BNY Mellon, Atlantis Seafood Wexford and The Griffin Group some of the finalists in the Large Business category.

We were very pleasantly surprised to win both the awards! 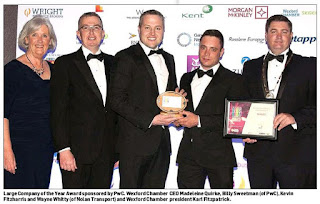 Wexford Large Company of the Year sponsored by PwC 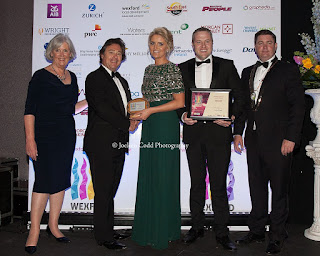 Wexford Chamber of Commerce have written a piece about the night, which you can read here: http://www.wexfordchamber.ie/wexford-business-awards-full-list-of-winners-runners-up/ and includes:

Nolan Transport, having won both the Large Company of the Year Award and the Export & Logistics Award, also took the coveted Business of the Year Award 2017.  Kevin Fitzharris, Ireland and UK Business Development Manager with the Company, accepted the Award on behalf of Team Nolan.  Kevin said "We have developed into one of Europe's leading transport companies, this acknowledgement by Wexford Chamber means a lot to all at Nolan Transport".

Popular posts from this blog

Finnlines Are Coming To Rosslare Europort

Good news for Nolan Transport and all our customers with the launch of a new direct Ro-Ro freight ferry service between Rosslare Ireland and Zeebrugge Belgium. Kevin Nolan from Nolan Transport has been in discussions with Finnlines to encourage them to start a direct link between Rosslare Europort and Belgium for freight, and we are now delighted to announce the launch of this new dedicated Ro-Ro freight service. This new service will be operated by Finnlines commencing July 2022 servicing Rosslare Ireland and Zeebrugge Belgium with twice weekly roundtrip direct sailings initially, with options for additional capacity. For further enquiries please contact sales@nolantransport.com
Read more

November 12, 2014
Changes taking place from January 2015 in relation to the European Union directive on Fuel Emission that all ferry operators operating in the Sulphur Emission Control Areas (SECA). The SECA zone includes English Channel and North Sea that we must travel though when moving your cargo going to/from Mainland Europe. The current maximum allowed Sulphur content in marine fuels is 1.0% and this will reduce to 0.1% within the Sulphur Emission Control Areas (SECA). Effectively this means that traditional heavy fuel oil used in freight ferries will be replaced with more refined fuel oil which is more expensive to purchase. All the various ferry operators within this area have slightly different but similar systems for calculating the SECA surcharges. We together have absolutely no control over this forced European taxation, The cost implications are unavoidable with a significant impact on current operating cost that we have to pass onto the customer. Details that we have received fro
Read more 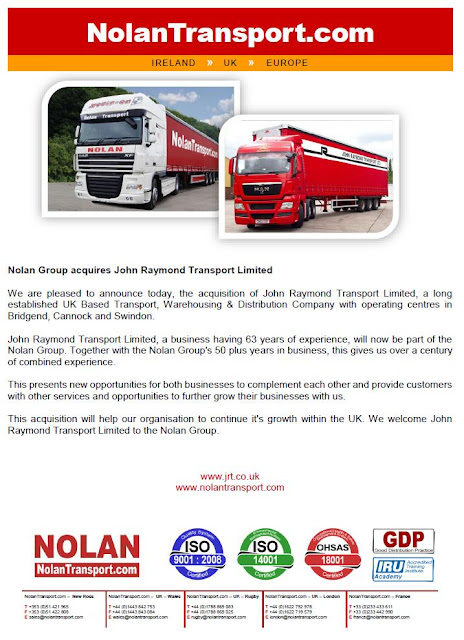